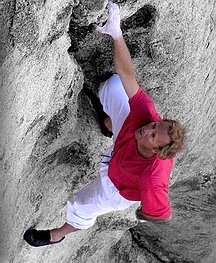 John Bachar fell whilst soloing at the Dike Wall, Mammoth Lakes, California yesterday and was found dead at the base of the cliff. He leaves a son, Tyrus. John was 51.

The Dike Wall is a beautiful cliff of pristine granite situated at 9,000ft above Mammoth Lakes where John lived with his son. John was climbing by himself and was found at the base of the 80ft North Wall.

You can offer your condolences at this Supertopo forum thread: John Bachar – In memory of a great man 1957 – 2009

John Bachar is an American and World climbing legend and was fierce proponent of ground up climbing.
John lived in Mammoth Lakes, California in the heart of the Sierra Nevada and was Director of Design of Acopa International, a rock shoe company, www.acopausa.com

John is legend in world climbing for many things. His 1981 first ascent of the beautiful Bachar-Yerian up the 150 metre (500 ft) main face of Medlicot Dome in Tuolumne Meadows was established from the ground up placing just 13 bolts hanging from hooks.