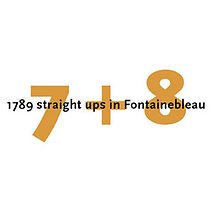 The acclaimed guidebook stood out for its excellent maps and topos, making less well known areas and boulder problems for the first time easy to find for non-locals as well. Also the attempt to describe all the known 7th and 8th grade (straight-up) problems without exceptions was highly appreciated. After years of renewed and tedious work, a fully updated edition of Bart's life-work has now been published, this time with the subtitle '1789 straight ups in Fontainebleau'.

In this new edition, almost 700 additional straight-ups have been described, next to 90 of the hardest 6c+ bouldering problems. For the first time, 34 classical traverses are mentioned as well. Bart's famous graphical layout sets new standards for bouldering topos, and due to the completeness of his guide, a boom of newly defined bouldering problems has emerged.

Together with the databases on the internet, it resulted in many new bouldering problems that became known in the last five years. Forgotten but interesting areas like Marion des Roches were brushed again, and new topos were made available to a broad audience. This resulted in an increase of described areas from 61 to 90. In the well known areas everything that wasn't claimed yet was claimed as a new problem, including uninteresting variants.

The boom of newly defined problems is a bit over now, and paradoxical enough a new edition of the 7 + 8 guidebook was overdue because of the success of the first edition. So, everybody has been looking forward to this second edition, in which all the new bouldering problems are listed as well. On top of that, this guide contains much more pictures, such that the number of pages has risen from 224 to 288. The guide doesn't seem thicker though, because another paper type has been used. However, the guide now weighs over half a kilo. The guidebook is more luxurious than the first edition, e.g. it now has a reading ribbon. Furthermore, all areas have been revisited and topos have been adapted if necessary.

With respect to the concept and the layout, nothing has really changed about the guidebook, although many details have been improved. It is now easier to browse through the guide, because the area names have been printed on the bottom left of the left pages. The stars next to the best boulder problems stand out more, and the photo captions point back to the lists of boulders. The overview maps are still in the back of the guide. Due to whiter paper and an additional color next to black and grey colors, everything looks more crispy.

This time the guide doesn't have a plastic slip-cover, but the cover itself is made of plastic. The possibility that the guidebook will break is probably even smaller with this new cover. The photos have been printed sharper, darker and most of the time larger than in the first edition, which makes them to stand out more in most cases. For the rest, 7 + 8 still focuses on the harder straight ups from 7a onwards, and traverses are not mentioned except for 34 classics.
The guidebook thus remains a must for everybody climbing harder bouldering problems, or hopes to do so in the near future. But it is also a guide for anyone who wants to be inspired by an afficionado of the forests near Paris. With all the maps and photos there is just one thing you want to do: get into your car and drive to Font. Hier geht es zur Bestellung