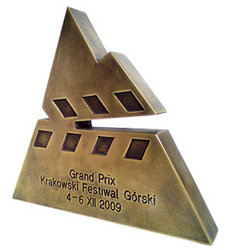 The Krakow Mountain Festival is a great celebration for climbers but also for other extreme mountain athletes, travellers and photographers.As in the previous years, Krakow will host the most famous climbers of the world, while screenings will present mountain films of the highest artistic merits.

The invited guests will include three great personalities of the climbing community. Lectures will be given by the first lady of global alpinism – Catherine Destivelle, one of the best ice and mixed climbers – Robert Jasper and phenomenal Adam Ondra, who despite being only 17 years old has already done some of the hardest sport and bigwall routes.The Polish climbing scene will be represented by Piotr Pustelnik, who has climbed all eightthousanders, Kinga Baranowska, who has ascended seven 8,000m peaks and this year's conqueror of the legendary route Action Directe – Adam Pustelnik.

Other highlights will include also sport emotions. One of the key events of the Festival will be Polish Bouldering Championships, in which the elite of Polish boulderers will present their skills.

The Krakow Mountain Festival hosts also the ceremony of the prestigious “Jedynka” Award – a special prize given by the representatives of the climbing community in recognition of exceptional achievements in the field of alpinism and sport climbing.Other attractions will include photographic exhibitions, outdoor gear and clothing fairs, workshops and discussions on safety issues in the mountains, a whole subject block on freeriding and several other accompanying events.