The new route is called Made in Poland and was graded VI.8. It may be treated as the first Polish 9a of an almost confirmed grade. Lukas has already done three routes of similar difficulties (Underground, Martin Krpan and Sanjski Par Extension).As he emphasizes, the effort he has put into climbing Made in Poland is comparable to the most difficult routes he has done abroad.

Made in Poland is the most difficult route done by Lukas Dudek in Poland. Moreover, it is one of the best achievements in the history of the Polish climbing.

Actually, Lukas started his adventure with specific climbing on Cimas (30-meter-high limestone vertical crags with very technical climbing on minute pockets) this year. Therefore, Made in Poland may be treated as a summary of his recent activity in Podzamcze.In April, Lukas led Pijane Trojk?ty. In the beginning of May, he did Pierwszy Krok Ku Doskonalosci. At the end of May, he succeeded on Power of Love, which Lukas considered to be the most difficult of the three routes.

Made in Poland starts with Power of Love and after its crux it traverses to Pijane Trojk?ty. After another bouldery crux, the route joins Pierwszy Krok ku Doskonalosci and leads up to its abseiling chain.

Lukasz on Made in Poland:
(…) The most difficult is the starting boulder – I've never done so hard moves in my life. On my first attempt I failed, on the second one – the same. And again and again on every following attempt. Finally, changing the shoes for softer ones gave a positive result.  At last I held the dyno to a mono, and all that was left… were three more boulder places. On the crux from "Krucjata" I was exhausted and very close to falling off.  Before the next bouldery place on "Pot?ga" there was an opportunity to rest. (…)

More about Made in Poland on Lukas' blog. 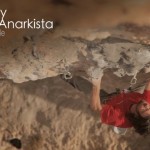 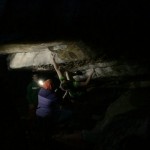 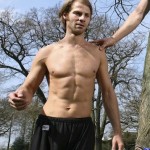