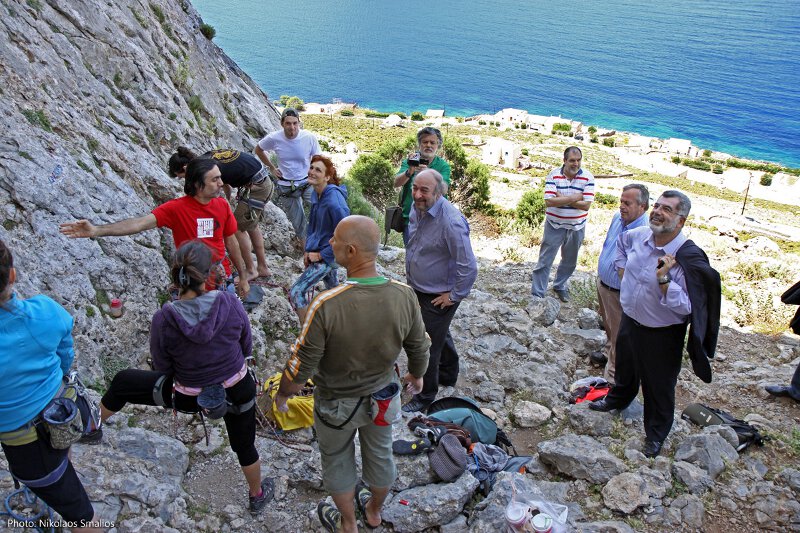 While not as busy as Easter, the “climbing' villages of Masouri and Armeos still were buzzing with several hundreds of climbers, nearly 300 of which registered for the event.

Belgian alpinist Nico Favresse, recipient of the Piolet d'Or, and Basque world champion Patxi Usobiaga mostly onsighted and flashed routes up to 8b, they climbed a multi-pitch, Uomo Senza Qualità 8a 135m, at sector Ocean Dream, and also made time for swimming and diving. On day four, at sector Odyssey, Patxi and Nico's audience included the Greek deputy minister of tourism George Nikitiadis along with the mayor of Kalymnos and other local politicians, which were greeted by the puzzled smiles of climbers who aren't used to seeing men in suits at the crags 😉

The deputy minister's visit to Kalymnos was covered by national television, so we hope Kalymnos will gain some much needed visibility and, in turn, increased support of climbing on a national level. As climbing continues to develop, this is more critical than ever.

Due to budget constraints and limited time for preparation we didn't have any “ultimate route' challenges, very hard ascents, or parties during this festival. In brief, here's what we did have:

Day one: opening address by the mayor and representatives of the organizing committee at Plaza Hotel; videos from previous festivals; buffet on the hotel's seafront terrace with homemade food by local women; climbing photo slideshow by local photographer Nikolas Smalios; live Greek music.

Day two: Nico and Patxi onsighted the multi-pitch route Uomo senza qualità 8a 135m, 7a obligatory, at sector Ocean Dream; Aris Theodoropoulos presented the latest edition of the climbing guidebook (2010) along with a history of climbing development on Kalymnos and suggestions for further development, such as the creation of a rescue team and the constitution of a board / council to coordinate and manage climbing on the island.

Day four: Nico and Patxi climbed at Odyssey. The Greek deputy minister of Tourism George Nikitiades made the trek up to Odyssey along with the mayor and other local politicians to talk to climbers and see the two stars in action.

For their sake, Nico cruised up Marci Marc 7c+ and then skipped the last quickdraw and the lower-off to take a big dive (!). In turn, Patxi tried Lucky Luca extension 8c and dynoed his way off the route at the crux. In the evening there was a press conference in Greek at the capital's cultural center, in which the deputy minister reported that there is every intention to support alternative forms of tourism and the establishment of an outfit to manage climbing nationwide.

That remains to be seen; fingers crossed. After the press conference people moved to the main square in Pothia for the bouldering competition; the bouldering problems set by climbers Zafiris Kamaropoulos and Dimitris Papageorgiou were ideal for the level of the competition and suspense was high. Unfortunately one of the female competitors injured her ankle in a fall, when she landed in the space between two mats…

Day five: winners of the photo competition were awarded (1st place: Joachim Thiel; 2nd place: Christos Papadopoulos; 3rd place: Sandra Hoogeboom) along with the winners of the bouldering competition. There was a bouldering demonstration by local children and Kalymnian dances.

On a final note, the Municipality of Kalymnos has reported that it intends to establish an annual climbing festival on specific dates in May. Besides making it a standing date on the world calendar of climbing events each spring, the aim is to achieve better organization and promotion and to secure serious sponsorship. There is already word about a pending collaboration with The North Face for the next festival in 2012. 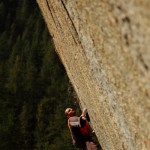 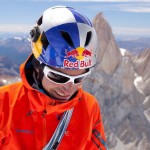 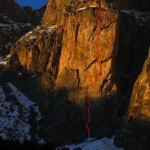 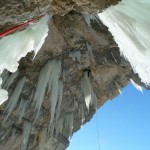