Ramón Juliá has made the first ascent of La Rambla extension at Siurana, Spain. He proposed 9a+ for this route. Yesterday he did the route on his 4th try of the day, the first try he rehearsed the moves, the second and third try, he fell at the second jump and on the 4th, he fired it. He needed 40-50 tries in total. Dani Andrada was there and made two tries too but he didn´t have any luck, but 2 months ago he fell higher than Huber´s top site. Reaching the point where he fell could very well be 9a says Dani (La Rambla itself is 8c+). He congratulated Ramón and they drank a cava bottle. Considering Ramonet needed only 5 tries to dispatch Kinematix, 9a, the number of 8c+´s he´s climbed, and the fact that this line has withstood all attempts by other extremely strong climbers, for example Andrada, the only reasonable conclusion is that 9a+ must surely be the correct grade. This means it´s a contender for the hardest route in the world, challenging Akira, 9b, Orujo, 9a+, and Realization, 9a+. Maybe Flex Luthor should be on that list, but since it´s ungraded… Ramonet is #1 in the world ranking at 12 670, which is the highest score ever recorded. We will present an interview in a week or so. 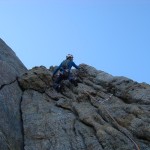