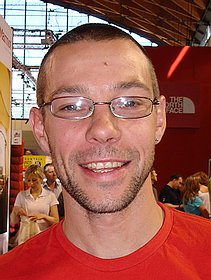 On the 26th of August a truly European team of climbers will leave the UK with one aim on their minds, to free climb The Eternal Flame route on Trango Tower. Also known as the Nameless Tower the 6,239m high east face is home to some of the best and most challenging multi pitch routes on the planet. Our objective takes the left hand skyline!

The Team
The team of six has been assembled by Type 1 Diabetic Jerry Gore. Jerry is an extremely experienced and highly successful climber who has led numerous expeditions to climb big walls and alpine routes all over the world. As one of the UK's leading expedition climbers Jerry has led expeditions to make first ascents of high altitude peaks up to 8000m in the Himalaya, alpine walls in Patagonia, the Pamir's, the Bugaboos, Baffin Island and Greenland. In 2000 he led the first successful ascent of Lows Gully Wall, which was the first expedition to be streamed live onto the web.

The second member of the team from the UK is North Face Athlete Gaz Parry. 35 year old Gaz has been a professional climber since 2000 and has been involved with most styles of climbing, usually at the highest levels. Gaz is more commonly known as a competition climber and as a long serving member of the British team has held all UK titles, placed 3rd at the World Cup in Birmingham and is the current Arco Rockmaster. With numerous E7 and E8 first ascents to his name Gaz has also excelled in the world of adventure climbing, a trip to Madagascar resulted in the first on-sight ascent of Always the Sun and in 2003 he made the first ascent of the Worlds Highest Sea Cliff, The 4490ft “Devils Thumbnail” in Greenland.

The second pair of climbers are from France. Denis Roy and Pierre Muller have been operating as a strong team for a number of years now and have traveled the world together. They met the English pair in Madagascar in 2006 and from that meeting came the Trango adventure. Denis has numerous first ascents to his name from 360m free routes up to 7c in Morocco to the first on sight ascent of Gonwanaland in Madagascar. Denis is now also a talented cameraman with two films, Madagasikara and Sahara Vertical to his name. He will be in Pakistan with his camera and will be filming the expedition for a DVD release in 2009.

Pierre Muller has taken expeditions to India, Jordan, Burma, Kirghizstan as well as excelling with winter ascents of the Matterhorn and The Eiger. Whilst in Kirghizstan he visited the Ak Su valley and made a rare repeat of The Missing Mountain. Pierre in his spare time is a I.F.M.G.A Mountain Guide and Medical Doctor.

The final two of climbers are David Kaslikowski and Eliza Kubaska from Poland. David works as a professional mountain photographer and was born in Warsaw in 1973. His main objective is exploration of Big Wall in remote mountain area combining this with climbing up to 8b/b+ RP, 7c+ OS and M10+. David has had many successful trips and first ascents. Barracuda 7c+, 600m and Fantasia 750m were climbed in the High Atlas Mnts in Morocco. Lotos Peak a 750 m high tower in Miyar, Himalaya. The 300m 8a Subinedo El Arcoiris in Mexico. The 1150 m long Last Cry of The Butterfly was climbed over two weeks to create one of the hardest Alaskan routes. In Greenland following in Gaz's he climbed a new route on the Worlds Highest Sea Cliff. The 200m route allowed David and Eliza to become only the second team to stand on the summit of Maujit Qaqarssuasia.

The extremely talented Eliza is one of the best Polish female climbers and one of the few women who open big wall routes in remote places. As an avid sport climber she on sights 7c and redpoints 8a and was Polish speed champion in her youth.

Her most important expeditions include new routes in Greenland, Mexico, Mali, Morocco and Jordan where she opened new multi-pitch routes with David Kaszlikowski. The Greenland expedition received the prestigious alpinist award, Jedynka, for the most important polish ascent of the year. When back in Warsaw she runs her climbing school “Only For Girls”.