10 years Melloblocco. These may seem like an instant and, at the same time, eternity. What is certain is that there was nothing ordinary about the path that has been paved. Its success cannot be explained by the mere numbers. Although these are large, enormous, unthinkable even if you return to 2004, to when it all began. Year in year out thousands and thousands of climbers from all over Italy and the rest of the world gathered in the Valley.

Thousands of youngsters, children, climbers of all ages united by a common love. True champions, keen climbers and beginners alike, joined by all those drawn to discovering this fun and play in Mother Nature. They all brought their energy to Val di Mello and Val Masino, their humanity. And the Valley, the nature of this wonderful valley, returned the favour with all her immense calm, her primal power. Perhaps this is the secret. It's precisely here where the small Melloblocco miracle lies.

Right from the outset the Melloblockers understood the beauty of this nature. They were capable of hearing her breathe. Together they managed to "live" the emerald meadows, understand the infinite rock faces, caress the boulders that had fallen from the skies, listen to the music of the waterfalls. They knew how to love, honour and respect all these wonders and shared their humanity with meetings, passion, climbing, joy and parties.All together they found, wanted, shared and built a way for this meeting. And they all tried to become a part of picture, using the valley's history as the basis, respecting and communicating with this, taking the idea into their own hands.

This is what it all stemmed from, from an idea. From the dream of a different future for this Valley, for all mountains. It is no coincidence that it all started with the Lombardy Mountain Guides, who organised the first three years. And it is no coincidence that the Valmasino town council continued this journey, followed by the Valmasino Tourist Board. An attention towards the valley and its population THAT went hand in hand with the awareness and commitment of the Melloblockers.

And it certainly is no coincidence that Melloblocco celebrated the birth of the Val di Mello Nature Reserve. The event has always been aware of its great revolutionary history that, in the 1980's and on these rock faces, played a fundamental role in the birth of a form of "new climbing". Because the beating heart of Melloblocco, as mentioned, is formed by this sharing. Or better still, by a culture towards nature which is shared and built on together.

All this, this entire story, will be told and retraced during Melloblocco 2013 which for these first 10 years won't last a classic weekend but a full 10 days. This is a  significant, powerful way to intensely experience the Valley and its rhythms.Then, as always, the fun, climbing, celebrations, encounters, book presentations, films, shows and music will feed from the passion of this multitude of climbers, from all the  Melloblockers. Once again Melloblocco will live off their energy and humanity, and these will join that of the Valley and of all those who have loved it over the years.

When: 26 April – 5 May 2013
Where: Val di Mello / Val Masino (Valtellina, Sondrio, Italy)
What: the world's biggest bouldering meeting
Who: for all those who love bouldering, from across the globe
What for: climb the numerous boulders and valley rock faces
Organisation: Associazione Operatori Val Masino

Melloblocco is open to all: info, program, registration on the official site: www.melloblocco.it 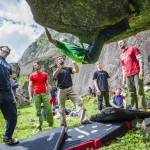 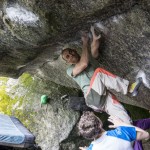 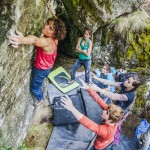 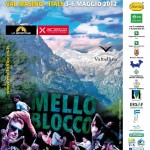