KSP Reports:Whilst most folks were doing Crimball Jon Fulwood was out havin' it on Peak Grit. From under the noses of all, Jon nailed Golden Egg (Font 7c+) at the former off the beaten track venue that is Clifftop Boulders down in the Cratclife area.As a result, the usually quiet and reclusive Clifftop Boulders have (temporarily?) morphed into something of a 'ticket only' venue. Decent days, weather wise, have been rare recently but last Sunday wasn't half bad and about twenty boulderers, myself included, rocked-up at Clifftop looking for some action. To be fair the weather in the southern Peak was a tad better than up north; certainly this was a principal factor behind our visit. However, many others were there trying to a get a chunk of Jon's Golden Egg. One of the more erudite amongst our party pointed out on the way home that at one stage there was no less than four Font 8b boulderers at Clifftop at one point in the day!I was seriously impressed on two counts. Firstly that for those in the know and prepared to spend some time exploring, ie folks like Jon Fulwood, there's still (obviously) some great stuff waiting to be done even in the Peak where you'd might well be of the opinion that every last bit of rock of any size has been given the once-over by someone. Secondly, that folks were super keen to get down there and get stuck in for the quick repeat.In the end, it was Ned Feehally who nailed the second ascent Â- though not without a bit of effort and the loss of a deal of skin. So impressed was Ned that he went on to add a direct version of Jon's problem at the same grade. Both problems look set to become classics, though both need good compression skills and the ability to roll down the hillside to say nothing of a great core, the ability to do the splits and use super sloping slopers.I stopped climbing just long enough to wonder the 70 metres of so past the main bloc at Clifftop to check out the action and grab a few pics before my hands froze solid. It was pretty Baltic so it was better to keep moving. Jon (on Golden Egg) and Ned (on the direct) provide the action below. Jon though gets the ultimate satisfaction of another great bloc to his name as well as helping to up-specing a venue where previously had there been more that two boulderers together it would have constituted a busy day! 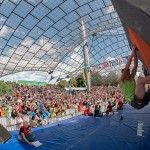 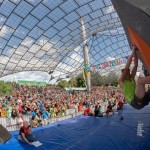 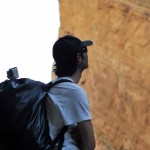