Back in 2001 Neil Gresham caused an ethical hurricane by creating The Tempest, a savagely technical route in Glen Coe. The ethical hurricane followed his ascent as Neil climbed the route after top-rope practice and he lead the climb using pre-placed protection. The usual style of ascent in Scottish winter climbing is ground-up.”I gave the route an 'M' grade, as I knew that they style I had climbed it in was very different.” commented Neil to UKClimbing.com. “I'm totally delighted these guys have done the route.” he enthused. “I wanted to bring M-Style routes to the UK, but I didn't want to place any bolts.”Neil's ascent was heavily criticised at the time, but Neil was completely open about his style choices. He placed no bolts and now the line has been climbed in the more traditional style.”They have sort of done the first proper ascent.” Neil said. “There is no way I could have climbed that line placing the gear.”Andy Turner grabbed the second ascent of the route, but before he could attempt an ascent he needed to remove the old fixed gear left in place by Neil:”Knowing the route was fully laden with rotten gear it took 2 attempts by abseil to get most of it out; the first time having climbed Scabbard Chimney, the second by Spectre. With every piece of gear I tried to retrieve the wire broke when I pulled on it.” commented Andy on his blog.The old gear Andy Turner stripped from The Tempest.UKC News, Mar 2010© Andy TurnerIt took Andy a couple of attempts on lead before he completed the pitch, his first attempt saw him lower off from his gear when he realised he didn't have enough rack left to protect the upper section.The route was graded M9 by Neil Gresham and Andy has given his thoughts on a Scottish grade on his blog:”The climbing was at no point mega strenuous but very tenuous. Although a different style of climbing it felt just as committing as Cracking Up down in Wales. At any point high on that route if I'd fallen I would have gone a fair way.I agreed with Nick Bullock on his grade of IX,9 for that route (Cracking Up), so trying to keep things relative I would guess hard IX,9 maybe X,9 at a push for the hard fought for gear and run out sections (On The Tempest). As always things always change with subsequent ascents, as people get beta on the route and placements improve.”Next in line for an ascent was Dave MacLeod, who put in an amazing performance.MacLeod climbed the route to within 6m of the top, but found he had run out of gear. Desperate to keep the onsight, he reversed the whole pitch, removing the gear, without falling and returned to the ground.Dave MacLeodJack Geldard – Editor – UKC, Nov 2008© Jack GeldardThe next day he returned and this time he carried more gear. From his blog:”After the alpine sun of the last month, it was Scottish business as usual, getting lost in the Coire for an hour just trying to find the route through the mist and snow. Various rubbish wires were found underneath the ice smear, as I waited for the constant dousing in spindrift avalanches to let up for just a bloody minute and allow me to gasp through the final moves.”You can read Dave's full write up on his blog.Neil Gresham was suitably impressed with Dave's tenacious ascent:”That is just so incredible,” said Gresham, “you can see just how far Scottish winter climbing has progressed in ten years. Back when I did The Tempest there were no Dave MacLeods!”Speaking to UKC for a forthcoming video interview, MacLeod commented:”I could climb the Tempest onsight and quite steadily, and that felt easier than the upper easy part of Anubis. I'm thinking that Anubis is maybe two grades harder, but it's really hard to know.”Given that MacLeod has the fitness to onsight and then reverse virtually the entire pitch of The Tempest, a route which weighs in at X,9, it is clear that Anubis, his recent addition to the stable of Ben Nevis winter routes, is significantly harder and MacLeod has once again taken British climbing to another level.Links:Dave MacLeod's BlogAndy Turner's BlogNeil Gresham's WebsiteYou can view more photos on Steve Gordon's excellent Blog. Dave MacLeod is sponsored by Gore-tex , Scarpa , Black Diamond and Mountain Equipment Andy Turner is supported by Mountain Equipment, Petzl , Beal and La SportivaDiesen Artikel inkl. Bilder auf UKClimbing.com anschauen 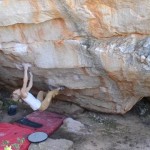