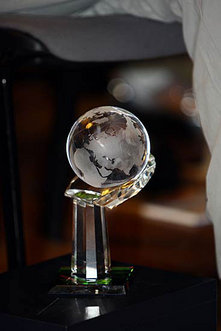 On Thursday 21 July 2011 and for the 6th year running the Arco Rock Legends will assign two prestigious awards: the SALEWA ROCK AWARD and the LA SPORTIVA COMPETITION AWARD, the sport climbing Oscars destined for those climbers who distinguished themselves most during the last season. The Awards take place during the most important event this year: the Sport Climbing World Championship which will be held in Arco from 15 – 24 July.

As usual 5 superb climbers are in the running for the SALEWA ROCK AWARD – a prize which recognises not only the best performances outdoors on single pitch sport climbs and bouldering, but also bears in mind the style of the climbers themselves. 3 super athletes are in the running for the LA SPORTIVA COMPETITION AWARD and this, as the name suggests, will go to last season's best competition climber. The nominations for this 2011 edition have been decided by 26 specialist magazines from 17 different countries: the Jury is exceptional and never before has it been so varied nor have so many magazines taken part.

The nominations for the “rock” Oscar couldn't have been better and as usual these come hand in hand with some exciting novelties. Beginning with young American ace Sasha DiGiulian who last March produced a run of climbs which has few equals in the history of female climbing.

The other novelty is the nomination of undisputed Italian talent Gabriele Moroni; after Manolo's nomination in the first edition, this is the second time an Italian is in the running for the prestigious prize thanks to an excellent season both with and without a rope which justifiably left its mark. But the Jury will also have to analyse the performances of other illustrious climbers who have already been nominated at Arco in the past.

Such as 2008 and 2010 winner Adam Ondra who, at 18 years of age, seems even more unstoppable than ever before. Another climber who dominates the crags in absolute terms is Chris Sharma and after his victory in 2009 he has now received his 4th nomination in 6 years.; this too helps explain why the 30-year-old American is widely considered “The King” of climbing. And, last but not least, the Salewa Rock Award is also up for grabs for young Frenchman Enzo Oddo who will come to Arco after an incredible year climbing across the globe. After 2010 this is already the second prestigious nomination for the 16-year-old. And who knows, perhaps 2011 will be his year?

The news from the competition front is the first-ever nomination for Ramon Julien Puigblanque, the athlete who over the years has won practically all there is to win in Lead competitions, i.e. climbing competitions with a rope. Last year the Spaniard won both the European Championship and the special Rock Master pre-World Championship event. He will by joined by Jain Kim from Korea, the undisputed power house who really came into her own last season by winning the Lead World Cup and the special Combined event which sums the results of all climbing disciplines.

The trio is completed with, once again, that man Adam Ondra. It comes as no great surprise if, for the second year running, the climber from the Czech Republic has been nominated fro both categories, for rock and competitions. The La Sportiva Competition Award is the only one missing from his list, but will his victory in the Bouldering World Cup and the 2010 Combined win be enough to convince the Jury?

The answers to all these questions will be found on Thursday 21 July, when the Jury unites to select the winners, right during the IFSC Climbing World Championship which will take place in Arco from 15 -24 July. This event, held in the cradle and the world capital of sport climbing, will see the best athletes in the world battle it out during 10 intense competition days like the world has never seen before. Absolutely something not to be missed!