Black Diamond athlete Adam Ondra has recently focused his energies to the world of bouldering, and the results have been stunning. This December, fresh off his second ascent of Gioia in Italy (at 8C+, one of the hardest boulder problems in the world), Adam set off for his first-ever visit to the iconic boulders of Fontainebleau, France.??

We sent videographer Alvi Pakarinen down to Font to film Adam during his five-day trip, and he was on the scene for a slew of hard sends by Adam.??

Here is Video #3 of the three-part series Alvi edited together for us of Adam's trip, and this one capture”s Adam's flash of Gekko Assis (8B+), one of the hardest flashes in history, on his last day in the forest.

Adam wrote the following about the moments captured in Video #3:

"After restday, we woke up into still and foggy conditions, but it was obvious that the fog must diminish soon and the sun will show up on the sky. Warm up in Bas Cuvier was an incredible joy, doing the first 6A (Marie Rose) and 7A (Joker) in a sunny morning was a true pleasure. Kheops assis was ticked off in a couple of tries. I went to L'Apparemment low start, an 8B in Apremont sector. This is truly incredible problem with insane typical-Font topoput. I had some problems, especially wet footholds at the beginning, but after an hour it was done. Just next to it, there was one more 8B, La pierre philosophale by Fred Nicole. A roof with hard fingerlocks, it was too much for the end of the day, Jacky was true claiming that this is one of the hardest roofs in Font.

One last day. My goal for the season was to flash an 8B+, but within autumn having too many projects, I abandoned this idea and gave it up for the year. But one problem came on my mind, Gecko. My friend Andrej Chrastina told me about it 5 years ago, when I did bouldering very rarely. Andrej was persuading me to go to Font to try this problem, saying that it would fit my style very well. A last day of climbing of 2011… why not give it a try to fulfill my goal of the year? All the other goals for the year I had already managed to fulfill (excluding competitions).

The day didn't start in the best way: after cleaning the gite and getting lost and searching for the bloc in the wood from a different parking, we arrived in the sector a little while after noon, already tired after the beginning of the day and after the climbing the previous day. I took some warm up, not feeling very well, but having a lot of psych thanks to cold conditions. I tried to remember the video from the previous night, asked my friends to clean the holds that I couldn't reach from the pads and I set off. First two moves were OK, then it was very hard to move left heel to the left. I was very close to falling, feeling that I was loosing a balance for a moment, but somehow I stayed on the rock. There is a one thing that I really love in climbing: heel hooking. And the rest of the problem is about awkward heelhooks and I felt pretty solid. The last hard movement I shrieked, but I was almost sure I would do it. I felt unstoppable at that very moment.

Concrening the grade I am not very sure, I would love to claim that I flashed an 8B+, but I am awkward to admit that I could climb that well. Considering the effort and how (not) fresh I felt, I can't agree with 8B+, at least for my height. Or was I really in such a good shape, especially when all the other repetitions had confirmed the grade of 8B+? I wish I were, but my own subjective feeling tells me something else.

The rest of the day we spent in Cuisiniere, where I had to climb Karma, the world-famous 8A. And despite humidity, mission completed. Duel, another famous 8A, seemed like an ideal end of the year, but I had to admit defeat in that humidity. Doesn't matter, the year 2011 was successful enough to make me feel satisfied and this trip will be definitely immense source of motivation for the next year.

Font is an incredible place and the beauty of climbing there was even better than I had hoped. It is definitely, the best bouldering area I have ever visited." 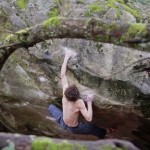 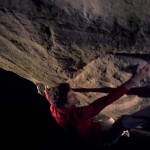 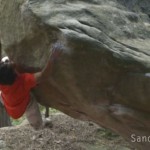 [VIDEO] Out Of Sight (Trailer) 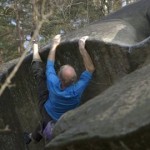 [VIDEO] Out of Sight (Teaser)