THE JOURNEY IS THE REWARD

You always have to go out for another quest on your way to perfection and harmony. The search for the master line is never ending! So staying in Cogne is great but I felt, that we had to leave we started to become restless – the quest is our live….

In fact as strange as this winter is for ice conditions in the alps, there were two lines formed in Cogne which we haven't seen since we live there (2004). Memoire du Bouquetin and Riaccamo in the Valeille were those. With the increasing popularity of Cogne's ice falls we climbed Memoire in the dark before leaving to the Ecrins for the ice meeting. No ice but lots of snow in Freissinieres and Fournel – drytooling was the only option and it was great fun to watch masters of the discipline like Jeff Mercier and Gaetan Raymond honing their skills… I had good fun climbing on the new school dry routes at the  "toit de chèvre".

Back to Cogne we had a quick mix of days ice climbing and drytooling in the Haston cave,where I climbed "Captain Hook"(M9+) and "Pyma"(M9), both short and powerful routes with a good chance to land on your head, if you blow a clip… On the same day when we left for Austria and Munich we climbed "Riacamo" , first climbed by Thierry Renault and Christope Profit back in 1993.Tanja enjoyed a thin and interesting first pitch with longer to go passages. From a perfect  screw belay I started in the traverse of the second pitch and I have to say, that the whole line is one of the best climbs we've done in Cogne. The ice of the stalactites proofed to be a way better in quality, than the ice in the first pitch and so with good screws I enjoyed great airy from dagger-to-dagger moves.

Some hours later we left for the eastern Alps. Coming late in the night to Innsbruck we saw no snow and the thermometer of our car showed solid positive degrees. So decision were quickly taken. No ventures for ice instead we were out early next day to the Dryland, Albert Leichtfrieds "Drytooling Mecca" above Innsbruck.  We played a little bit that day, but all of us had just three hours sleep. Nevertheless the walk to the cave was good and the view is not to be missed.  We came back next day. I climbed the ultra classic "Happy" (M9). Heike was unlucky with a flying tool, but it's part of the game, while Tanja sent the route in her very precise style some days later. Drytooling is for those who are initiated in the values of ice climbing and alpinism a good exercise to get more control about movements and gain more power but should never be mistaken with climbing on the real thing: ICE !! 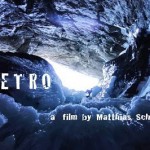 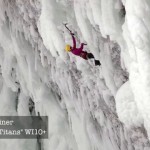 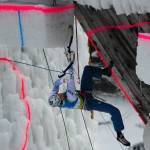 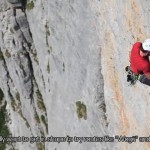