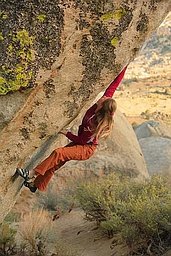 Yesterday (Friday) afternoon, Lisa climbed The Mandala (V12), becoming the first female to climb this line first done by Chris Sharma in 2000.The problem has gained almost mythical status as one of the most popular and most famous lines in the world, and for good reason: it is an extraordinary climb.

Lisa was psyched to achieve this goal that she's been aiming for since last season when she first started trying it. A torn bicep, weird weather conditions, a mystery illness, and a flim project revolving around her ascent of the super-highball This Side of Paradise (v10) kept her from success then, but this season, on just her third day of tries, she climbed the line at the third attempt, saying that moments before doing it, she felt strangely certain of success.

She nailed the critical, and for her extremely long, first move to perfection, and powered through the rest of the sequence with precision, only hesitating for a second before turning the lip onto the icy summit.

I shot video of the ascent and I'm sure I can make it available either on this blog or elsewhere in the near future.