John Dunne has climbed a new three pitch route on The Bastion, Cioch-na-h-Oighe on the Isle of Arran off the south-west coast of Scotland, widely recongnised as one of the last great lines in Britain. John has refused to grade the climb, giving it HXS – the same grade given to Parthian Shot, although it is likely to be around the E9 mark. The first pitch of the route was quickly repeated by Dave MacLeod, who climbed a different top pitch thinking it was John´s route and sparking rumours that the route was curiously uncleaned – hopefully laid to rest. In John´s words: “I made the first ascent of The Great Escape on Thurs 21st June and graded it HXS 6b, 6c, 6c. The reason for HXS is that I think with last great problems and superb lines the grade is almost academic. Recent years have proved that if I give a route a true grade the armchair critics automatically downgrade it whether they climb it or not. When I climbed Partheon Shot in 1989 I graded it HXS 7a, therefore it is in the hands of the repeat ascensionists to offer a grade. An interesting point is nobody ever asks how good the climbing is only its grade. A sad reflection of some parts of the climbing community perhaps? This bold line, with superb climbing was completed with all protection placed on lead, except for one in-situ thread runner. I placed great emphasise on this style of ascent after seeing first hand the amount of pegs and, more surprisingly, bolts placed on existing routes. Bolts have no place on mountain crags and in my opinion they should be removed, the possibility of which I would like to explore in the near future. This made it even clearer in my mind that I wouldnt use pegs and certainly not bolts on the wall. Mountain crags must remain bolt free and any lines that could go with the odd bolt or two now should be left for future generations. Without doubt this line will rank amongst the best in Britain and will in time became a classic.” The Great Escape HXS 6b, 6c, 6c *** The Bastion, Cioch-na-h-Oighe, Arran First ascent – John Dunne, Andy Jack 21/06/01 Pitch 1. 6b. Climb the open groove right of the 1st pitch of Abraxas, over a roof to an obvious belay ledge. Pitch 2. 6c. The awesome main pitch. From the belay climb directly up the stunning leftward trending groove-line to a poor in-situ thread runner. Make difficult moves diagonally leftwards to gain the left-hand pincer. Follow this in a spectacular position to a belay on the Tidemark ramp.Pitch 3. 6c. Above the belay climb the obvious scoop, hard move at roughly 5m, to a spike runner. Ascend the slab above and finish up easier ground and the top of ledge 4. 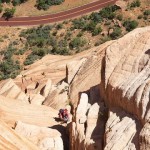