“A lot of rain and humidity in the Valley, with some sunny and hot conditions mixed in. We jugged up the ropes in the evening right when the rain stopped, hoping that we would get in a good session of night climbing, but instead we just got soaking wet. Even though we could see the stars, it was still raining on the wall and the water turned into a waterfall. We spent a very cold and wet night in the portaledge, and waited ’til the sun came out and dried our clothes and the wall. As the sun came, it got really hot too. I still worked the traverse pitches, which only just destroyed my skin. We rested on the portaledge and in the late afternoon, I went on pitch 16. I wanted to check the loop instead of the dyno. I found out that the loop is equally as heinous as the dyno itself and super tricky. It was still really warm and my soft skin did not help either. I spent around 3 hours on this pitch, refining my beta all over again. I wanted to send pitch 16 that day, but by the time I had the beta, I was so exhausted that it was not possible any more.

Complexity and difficulty of the whole climb is just shocking to me. I might have been too optimistic, but I definitely expected it to be easier. Every single pitch is so tricky and hard and yesterday on pitch 16 was the most frustrating day so far on the wall. It revealed the real difficulty of the whole climb and crucial importance of good conditions and skin. Hats off to Tommy and Kevin, who believed that the whole climb was possible before they free climbed. Without having the beta, some of the sections look just impossible. I have the advantage that I know that the climb is possible and that helps me to keep the faith that I might be able to do it as well. I am humbled and impressed by what Tommy and Kevin did!

To make everything more clear about what is going on on the wall, I will make a little recap. We spent a few days going ground up, using free and aid climbing techniques to fix the lines and be able to work on the pitches and get up and down easier, which was bold and scary most of the time. So far, we made it to the top of pitch 16. Above that, the climbing is by no means easy, but there are no more crux pitches. In the next week, we will continue to fix our ropes even higher and take a look at the whole route. But before that, I wanted to work on the crux pitches and see if they are possible.

These days, we are using fixed ropes to jug up to the pitches I need to work. Then we go down to the Valley in the evening after one day of climbing or we stay on the wall for two days and sleep on the portaledge. At a certain point, I will decide to give it a try to climb the whole route in one single push. But before doing that, I need to see the whole route (not only first 16 pitches but all 32) and have every single pitch super wired. This will still take at least two weeks. Little intermediate goals before the final would be redpointing the individual pitches, most importantly the crux pitches (14-16).”

“Another day in the office;-) We hauled up and set up the portaledge up on the Dawn Wall yesterday. I got to the top of pitch 16, and worked the moves of 14, 15 and 16 till late night. These are three of the hardest pitches on the whole climb, on every pitch I missed one liitle piece into the puzzle, but with better skin and colder conditions (which are on the way), I will hopefully have these pitches super wired soon.

Pitch 14 has this really mysterious last boulderproblem, seemingly blank, but offeringva a few razorblades that are just horrible to look. The previous boulderproblems on this pitch felt very good.

Pitch 15 has this really small razorblade that I did not want to pull in thesw warm conditions so I would cut my skin open. The rest of the pitch felt good.

Pitch 16 has this crazy dyno that definitely felt hard. I did not do the single move, but there is always an option to make the loop variation. The rest of the pitch is tricky and insecure but I found my way.

Next days I think I will work on these three pitches if the weather allows.”

“Yesterday was a probably the longest climbing day of my life. We went wizmth my dad up on The Nose, wanting to free it in a day. we started with the first light and up to the Great Roof it was going well, onsighting all the pitches in around hours. But Great Roof shut me down. I had a pretty good flash go, got the beta, lowered and gave it a second shot thinking I would fire it off easily, but I have not realized how important the feet are on this climb. After climbing so many pitches and taking no rest after my flash, they went super shaky and weak. I fell, gave it even third go and fell in the end of the traverse. There was no point of giving more tries and we just wanted to top out. Time to switch for the night climbing and onsighting all the pitches except for Changing Corner, topping out at midnight in the starting rain. Full alpine experience as we did not find the descent route in pissing rain and had a wet and cold bivy in the little cave, before we finally got to the car at 9 AM.

The Nose is one of the most famous climbs in the world and I am super glad to have climbed it with my dad, even though not free. A big day out.”

“Yesterday was another day on the Dawn Wall. We had our fix lines on the top of pitch 10 and we wanted to move as high as possible. But we would face some of the crux pitches of the whole climb. Fortunately, the pitches were better protected and it was not such a big problem to climb through the next 5 pitches, including the crux traverses. I would like to emphasize that I am not free climbing everything yet, the goal is only now to go ground up to the top, using free climbing and a little bit of aid climbing, to fix the whole line with ropes and start working on the pitches properly to have them ready for the final free push later. So if the crux is around the protection, I just touch the holds to see how the sequence would be and continue. Crux pitch 1 looked definitely super hard to free climb. Almost impossible, I will have to take a look at all these razorblades more closely;-)

Finally, already in the dark, I was pushing through the pitch 16 (dyno pitch), but I was stopped by the final bold section of the route, where I felt I needed the light for climbing this tiny layback high above bad protection, so we just called it a day a went down back to camp 4. Now it is two days od rest to heal my skin and I will try The Nose.”

“We started pretty late yesterday and the fact we are very inexperienced was obvious right from the begining – I did a lot of jugging up in my life, but only sport climbing and always using one GriGri and one ascender. Bad technique resulted in being super slow and tired after having jugged up the first 7 pitches. It was 3.30 PM by that time, so I managed to get to the top of pitch 10 until it got dark. It was quite intense, a lot of bold climbing again, especially on picth 10, which is another horendous layback with poor protection, but combination of aid clmbing, french freeing and fear made me go to the top with none of my pieces of pro being ripped off. I din not feel like going for more adventure in the dark, so we just fixed our ropes and I tried pitch 7, 8 and 10 (5.14a, 13d and 14a) on the top rope with head lamp. These pitches are not only bold, but freaking hard too! Definitely no easy grades for these ones, Tommy and Kevin are tough guys! I tried the moves all over again to get some confidence and we got back to the camp by 12.30 at night. Big day for sure.”

“First day on the big wall in Yosemite, and straight onto the Dawn Wall! Foolishness, lack of respect or boldness? Well, not necessarily any of it. The Dawn Wall just dries up quickly after the huge rain on Sunday. And it went all right. Definitely scary and adventurous. Tiny footholds and insecure climbing, smearing my feet onto glassy footholds of Yosemite granite and all that with poor protection by copperheads, peckers, tiny cams and occasional bolts.

I ripped some copperheads, took some falls but made it to the top of pitch 7 and fixed our ropes. Leading the pitches with all the fear definitely felt super hard, but once I had the rope from above, the moves felt OK. But grades on the Dawn Wall are definitely not overrated. Great success for today and 5 pitches to go tomorrow to have our ropes fixed under the crux pitches.” 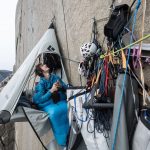 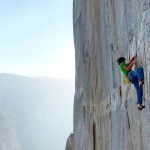 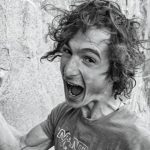 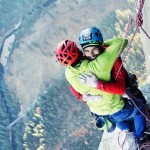