Music:
"Something Elated" by Broke For Free (brokeforfree.com/)

In the BBC own words – bbc.co.uk/news/uk-scotland-highlands-islands-18074424
'A new short film about Lochaber-based climber Dave MacLeod is being produced with an aim of showing it at mountain festivals around the world.
Video production team Wojtek Kozakiewicz and Lukasz Warzecha shot Mr MacLeod bouldering in Switzerland.
A heat wave made difficult climbs even tougher in an area called Magic Wood, before temperatures dropped and Mr MacLeod completed the challenges.
A 10-12 minute long film is being made for screening at festivals.
For 2013, a full length film will be released and made available as a free online viral video.
Mr MacLeod was filmed as part the production team's Polished Project, which features other professional climbers and international ice climbers.
Mr Warzecha, a photographer and visual artist, said: "Our upcoming film, Dave, will be telling a story of Dave's climbing career.
Mr MacLeod completed a number of climbs in Switzerland's Magic Wood
"The film centres around Dave's exploits in the Magic Wood – climbing New Base Line, Mystic Stylez and others – and at the same time it touches strongly through interviews on Dave's career and life.
"The final piece would be Dave's portrait as a professional climber."' 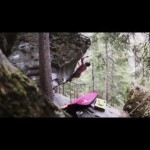 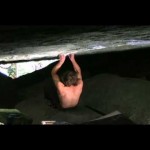 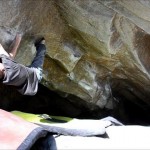 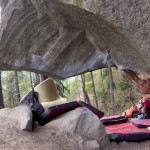