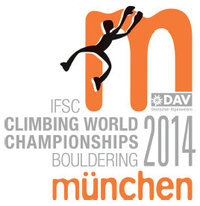 With top athletes coming off summer adventures and training as well as newer faces making the trip, the Boulder World Championships will truly display the best of the sport, both in athletic performance and values of cooperation and accessibility.

A title too close to call In the women's field, with the World Cup title decided only during the last competition in Laval, the 2014 World Champion title will be fiercely contended by this season's top women: Akiyo Noguchi (JPN), Shauna Coxsey (GBR), Anna Stöhr (AUT), Juliane Wurm (GER), Miho Nonaka (JPN), and Alex Puccio (COL), who didn't participate in the last two World Cups. But with new climbers like Fanny Gibert (FRA) showing their strength at the end of the season, nothing is set in stone!

The men's competition promises to be fierce, with 2012 World Champion and 2013 overall gold medalist Dmitrii Sharafutdinov (RUS) looking to make up for his second place finish in the 2014 World Cup rankings, as he missed gold only during the last World Cup in Laval.Currently ranked number one in the World Cup standings, Jan Hojer (GER) will be looking to hold on to that spot in his home country, and we must wait and see how summer training paid off for 2012 silver medalist Kilian Fischhuber (AUT). With a large group of men consistently rotating through the finals, the competition will definitely be riveting!

Solidarity in the spotlight

The IFSC is committed to empowering athletes through the Solidarity Program, which allocates travel stipends and free accommodation to athletes who would not otherwise be able to participate. Athletes from South Africa, Taipei, India, Iran, Australia, Colombia, Honduras, and Peru will receive such aid for the Boulder World Championships.

Climbers Against Cancer, the IFSC Official Charity, will be releasing limited edition t-shirts and making a donation to a German cancer research center during the event.

Finally, Athlete Commission elections will take place during the World Championships in Munich and Gijón. Elected for four-year terms, members and president of the Athlete Commission work closely with the IFSC Executive Board to make sure their voice is heard during decision-making.

More information on the event, as well as live streaming of the semi-finals and finals on: www.ifsc-climbing.org As always, we are present on Twitter during competitions, so reach out with the hashtag #IFSCwc.