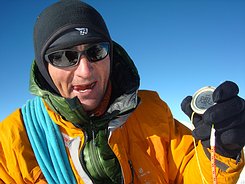 Steck, with climbing partner Simon Anthamatten (SUI), reached the summit of the 6500m mountain using Alpine style (without fixed ropes or previously stored materials), in 60m pitches and without the use of bolts. Leaving their base camp at Thengpo, which lies at 4250m above sea level, approximately 125km East of Kathmandu in Nepal on April 21, the duo bivouacked a total of four nights on the steep and dangerous face. Measuring their ascent with Suunto Core wristops was key to their success. “We reached the edge of the wall at an altitude of 6350m and spent another night bivouacking on the gruesome summit ridge,” said Steck. “We reached the Tengkampoche summit (officially 6500m) at 7.15am on April 24.” Returning to base camp that evening, they celebrated their success with “a can of beer”. An earlier attempt on the face on April 10 was cut short after Steck, 31, and Anthamatten, 24, had to turn back at 6000m due to heavy snowfall.  The Swiss pair will now travel back to Kathmandu and prepare for their next goal in their Nepalese expedition: the South Face of Annapurna, another notoriously difficult and never-before completed climb. Steck is returning to Annapurna one year after a solo attempt on the South Face saw him fall 200-300m after a dislodged rock hit his head. Luckily escaping with relatively minor injuries, he is determined to make the summit this time round. “For Annapurna I will try and take only what is necessary,” he says. “Too much weight at this altitude will decide the success or failure of an expedition. I always calculate very carefully what I take with me or not. With alpine style, the climber, not the equipment counts.”  “I am ready for this next expedition and I am looking forward to it.”