In a packed area (the Edge at Sheffield!) crowds began gathering around 4.30 for the official practice session. It soon became apparent that most of them would be competing as a queue formed and people started hurling themselves at the three practice holds – set at 1.5m (women´s qualifying height), 1.9m (men´s qualifying height) and 2.3m. A strong foreign contingent, lead by David from Poland and half a dozen Spaniards showed some early form that would obviously threaten the unofficial men´s record of 2.43m. Another half a dozen turned up in fancy dress – there was the incredible dynoing yeti, Miles and his marigolds, a leather bound gimp, Osama Binladen (Mo Overfield), a spider and a few token hat wearers. Bendcrete gave away a Morphix bouldering pad to the ´best dressed´ competitor – Miles Gibson.

At 5.30 the women´s qualifying round started with each competitor having to dyno 1.5m. They all managed it pretty easily. Then the men had to do the same at 1.9m. Only Miles Gibson with his slippery marigolds and restrictive skirt, and Mo Overfield, carrying a Kalashnikov and a pistol, failed to qualify. Funny as they were probably two of the strongest boulderers in the room!

At 6.30 the women´s comp kicked off. Katie Mills, Susan Hatchell, Lucy Atkinson, Lucinda Hughes and Katherine Schirmacher all made quick and easy progress through the first couple of heights. Katherine looked strongest, but Lucinda Hughes refined her technique with each round and was soon the only challenger as the finish hold moved to 1.9m. The previous record had been 1,8m! Katherine held it. Lucinda didn´t. 1.9m, that´s just over six foot two, a new official Guinness World Record! Lucy Atkinson came third

As the first few rounds of the men´s competition started the finish hold was moved my 10cm each time in an attempt to thin the numbers. It didn´t work. Some competitors chose to pass a round, as you can do in the high jump, to keep themselves fresh for later. At aro9und 2.2 / 2.3m most fell by the wayside, including Pat King (who tore a chunk out of his hand) and Adam Long, previous dyno comp winner and unofficial world record holder at 2.43m respectively. With three Brits, three Spaniards and a Pole still in at around 2.45m there were seven people clearing the previous world record – some with ease! David from Poland looked happy enough as did Chris Graham, who´d passed on some big rounds, and Matt Heason. The hold was now being raised in 2.5cm increments, creating an electric atmosphere amongst the crowd, and making the competitors pretty tired. As it passed 2.5m three competitors remained, David, Chris and Matt, all with clean sheets. Then David and Chris failed on the their first attempt at 2.525m, but Matt didn´t. At 2.55m David went out. At 2.55m both competitors failed on their first attempt. The judges announced that if they failed on all three goes, sudden death would ensue! With that in mind, and Chris having failed on his second go too, Matt stepped up, paused and hung 2.575m to the crowd´s delight (here´s a video clip of Matt becoming the world record holder – and winning the £500). Chris put in one more valiant effort, but missed by millimetres. Having officially won the comp Matt was asked if he´d like to go higher. The crowd answered for him in true Bruce Forsyth fashion and the hold was moved to 2.6m. He narrowly missed it on his first go, his third failure of the evening, but latched it on his second to set a new Guinness world record of just over 8 foot five inches (exactly two feet over his head height). Once again it was moved up, to 2.625m, but he narrowly failed on both attempts, clearly exhausted, but pretty happy!

The finishing Jug After the comp finished most of the competitors and spectators moved on to a party organised by PlanetFear for a well deserved buffet and a few beers. The competition was sponsored by Bendcrete who gave away a significant amount of prize money to the first three women and men, and a load of Morphix kit. If anybody is interested in hiring the custom built wall for a competition in their area, contact John Hartley, the General Manager Tel: 0(44) 161 338 3046 Fax 0 (44) 161 338 7956 www.bendcrete.com For anybody who doesn´t know exactly what dynoing entails, here is a copy of the rules and regulations: Rules THE BENDCRETE DYNO COMPETITION RULES General Rules 1. Competitors must be aged 16 years or over. 2. Competitors must register to compete. 3. When the competition starts, registered competitors will be called by name to take their turn.As there is no isolation area, competitors will be expected to be within the area of the Dyno board and will therefore be permitted to watch each other. 4. Registered competitors who arrive late will start the competition at whatever height the target hold is set at when they arrive.However, once the sudden death section is completed late arrivals will not be permitted to join the competition. 5. Rock shoes/boots must be worn by all competitors. 6. Chalk bags will not be worn whilst competing. The Dyno Board 1. This will overhang by 20º. 2. The start holds will be two large handholds set level with each other and 200mm apart.Below each handhold will be a regularly spaced series of identical, positive footholds. 3. The target hold, a very large, double handed ?jug?, will be moved along a line of bolt holes set at an angle of 45º from the left hand fixed handhold. 4. The distance measured will be between the fixing bolts of the target hold and the left hand fixed hold. The Dyno 1. Competitors must hold both starting handholds, with their left hand on the left hold and their right hand on the right hold.No crossed hands will be permitted. 2. Competitors are permitted to use any configuration of footholds.However, feet must not touch the starting handholds. 3. An attempt is classed as having started as soon as both feet leave the ground.Stepping down or falling from the start holds will terminate the attempt. 4. An attempt is successful if the competitor hangs the target hold in control with both hands.The judges? shall decide whether the competitor hangs the target hold ?in control?.As a rule of thumb, two seconds should be enough.The judges? decision is final. 5. Competitors may opt to ?miss? a height, but will not be allowed to lower the target hold should they change their mind.All competitors must make a successful attempt at the final height in the sudden death stage, in order to continue to the next stage. 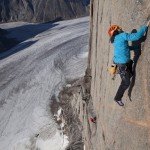 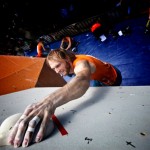 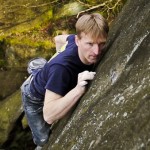 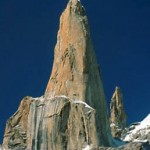