Tiso and Berghaus pledge boosts Scottish Mountain RescueThroughout September, Tiso and Berghaus are committed to donating 5% of the sales revenue from key products to the 31 official teams in Scotland. All Tiso stores in Scotland and online participated in the promotion. Mountain Rescue in Scotland is carried out on a voluntary basis by members of the various teams, co-ordinated by the Mountain Rescue Committee of Scotland, a charity that relies on the generosity of individuals and organisations. Every year, volunteers in the teams from across Scotland attend around 500 incidents. In an era in which people are heading off into the outdoors in greater numbers than ever, the work of organisations such as Scottish Mountain Rescue is of vital importance.Stuart Ruffell, team leader of Tweed Valley Mountain Rescue Team, commented:?As a charity, Scottish Mountain Rescue relies on the dedication of the many volunteers who are team members. We are on call 365 days of the year and we also train every week. Finding time to raise much needed funds on top of that commitment is incredibly difficult, so initiatives like this are very welcome. As well as the direct financial benefit it should deliver, we are hopeful that this partnership between Tiso and Berghaus will help to raise the profile of Scottish Mountain Rescue and encourage people to pledge their support to an emergency service that plays a vital role in Scottish society.? Singu Charpa North Ridge gets First Ascent A Russian team has made the first summitted ascent of the north ridge of the Singu Charpa which resides in Pakistan´s Nangma Valley. This mountain, and particularly the ridge line, became infamous in 2007 when a Ukranian team claimed to have reached the summit in 2006. They were subsequently nominated for the 2007 Piolet d´Or but a team member told the organizers that in fact they had not reached the summit and had stopped 100m short.The Russian summit is only the second ascent of the mountain and overall it took 21 days to climb the 2.3km ridge and 3 days to descend to base camp. The team reported heavy rockfall, terrible weather and chossy rock with difficulties up to F7a, M5, A3 & grade IV ice. Source: Alpinist.com & Mountain.ru 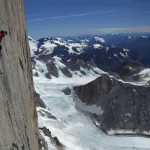 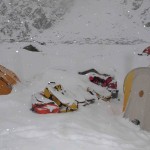 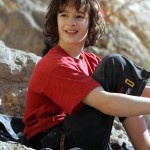